The goal of this project is to devise an algorithm for solving Rubik’s cube, using three sets of moves that each accomplish a specific function.

Rubik’s cube is an interesting 3-dimensional puzzle that challenges your spatial imagination and memory. The goal is to arrange the cube so that each side is a solid color, as shown in Figure 1. 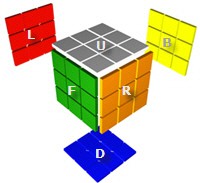 Figure 1. Diagram of a solved Rubik’s cube. The six sides are named in pairs—up-down, front-back, and left-right. The up (U), front (F), and right (R) sides are visible. The remaining sides—left (L), back (B), and down (D)—are shown by the projected images.

Figure 1 also shows the labels we will be using when referring to sides of the cube. The six sides are named in pairs—up-down, front-back, and left-right. To refer to a specific side, we’ll use the one-letter abbreviations shown in Figure 1 (U, D, F, B, L, R).

The cube is built in such a way that each side, row, and column can rotate (see Figure 2). With a few turns, the colors can be thoroughly mixed up. How can you get all of the squares back to their original positions? It’s quite a puzzle to get the colors arranged properly again! 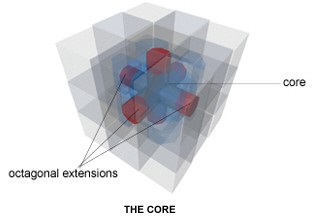 Figure 2. Diagram of the core of a Rubik’s cube. The core enables each side, row, and column of the cube to rotate.

In this project you’ll learn three sequences of moves that accomplish specific rearrangements of the squares on the cube. Can you figure out how to use these three move sequences to solve the cube?

Before we present the moves, we need to introduce some more terminology, so that we can distinguish individual pieces on the cube. Rubik’s cube is made of three different types of pieces. We will refer to them as center, corner, and edge pieces. The puzzle has six center pieces, one in the middle of each face. Each center piece has only one visible face. There are eight corner pieces on the puzzle. Each corner piece has three visible faces. The remaining twelve pieces are edge pieces, occupying the middle position along each edge of the cube. Each edge piece has two visible faces.

The shorthand notation is easy to learn. There are just five rules you need to know.

If you are unfamiliar with the Rubik’s Cube moves, an online Rubik’s Cube solver like the one listed in the Bibliography might help you gain familiarity with the moves.

The first exchanges the positions of three edge pieces at once, altering nothing else. The three affected edge pieces are all on the center column: the bottom and top edge on the left side, and the opposite edge on the top side (see Figure 3). Repeating this sequence three times will restore the cube to its original configuration.

Figure 3. Move sequence #1: exchanging three consecutive edge pieces in the center ‘slice’ of the cube (yellow arrows at left). No other pieces are altered by this move sequence. Repeating this sequence three times restores the cube to its original configuration.

The second sequence ‘cycles’ five corner pieces: the four corners of the front face, plus the upper right corner. It also exchanges the positions of three the front side edge pieces, as shown in Figure 4.

The third sequence ‘flips’ each of two opposite edge pieces in the upper layer without altering anything else on the cube, as shown in Figure 5. The two edge pieces wind up back in their original places, but with the original colors ‘flipped.’ Compare the before and after views to verify that this is true. Note that repeating this sequence twice restores the cube to the original position.

Figure 5. Move sequence #3: ‘flipping’ two opposite edge pieces (marked by *’s in the ‘before’ view). The effect of this sequence is to ‘flip’ each of these two opposite edge pieces, without altering anything else. The two pieces will be in their original positions, but with colors reversed. Repeating this sequence restores the cube to the original position.

Note: Move sequence #3 is much easier to remember (and can be done more quickly) if you move the center column of the front side (a center ‘slice’ of the cube) rather than moving the left and right sides. Try this out with your own cube and verify that it does the same thing. (Unfortunately, the Java applet used for the animated diagrams does not provide for movements of center slices, so we can’t show you this alternate sequence with an animated diagram.) Here is the move sequence in shorthand, using center slice moves (Fc means to rotate the center slice ‘up’ and Fc’ means to rotate the center slice ‘down’):
Alternate shorthand: [Fc U’] 3 times, then [U’ Fc’] 3 times, then U2.

Can you figure out how to solve Rubik’s cube using only these three sequences of moves?

To do this experiment you will need the following materials and equipment: