Watching a spacecraft launch is an amazing experience. It is thrilling to see it lift off and escape Earth’s gravity. Did you know that it takes a chemical reaction to get a spacecraft into space? Every time you see a one blast off, you are watching chemistry at work. In this chemistry science fair project, you will also get to blast an object into the air. You will not be using the same fuel that NASA uses for the rockets that launch their spacecrafts; instead, you will use two simple ingredients—baking soda and vinegar. How much do you need of each to get the highest launch height? 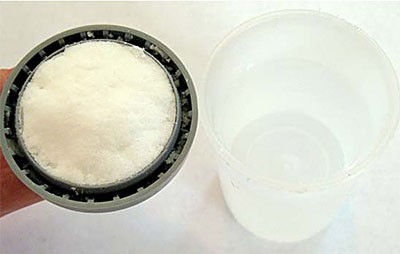 To determine the correct ratio of baking soda to vinegar that will result in the highest launch of a plastic canister.

Have you ever watched a spacecraft launch on television or seen one live? One question that may have crossed your mind when watching this awesome spectacle is, “How does a spacecraft lift off and get into space?” The simple answer to this question is that the spacecraft has engines that lift it into space. All rockets depend on combustion to provide the thrust that is required for a vessel to overcome the force of gravity and climb into space.

One well-known spacecraft that you may have seen launch is the National Aeronautics and Space Administration (NASA)’s Space Shuttle, shown in Figure 1 below. The Space Shuttle did operational flights for 30 years, from 1981 to 2011. It had three major components: the orbiter (a winged “space-plane” which held the astronauts and different kinds of payload), the large, dark orange-colored external fuel tank, and two solid rocket boosters. At launch, the two solid rocket boosters, along with the orbiter’s three main engines, would power the liftoff. 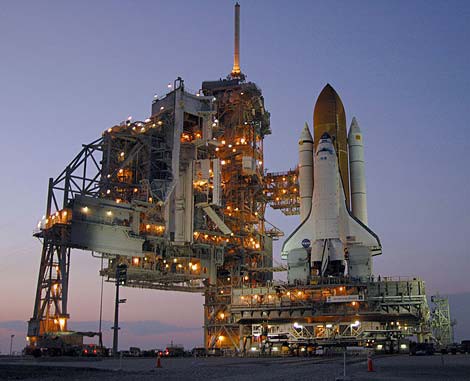 Figure 1. Rocket engines on spacecrafts, like NASA’s Space Shuttle (shown here), use a type of chemical reaction called combustion to launch the spacecraft. On the right in this picture you can see the Space Shuttle and its three main components: the orbiter (the white winged plane in the middle), the large external fuel tank (behind the orbiter), and two solid rocket boosters (also behind the orbiter, on the left and right sides).

Contrary to popular belief, it does not take an explosion to get a spacecraft off of the earth. Rocket engines function on the principle of combustion. Combustion is a fast chemical reaction between a fuel and an oxidizer (such as oxygen) where the fuel is burned or oxidized. Usually the fuel is an organic compound (containing hydrogen and/or carbon, and sometimes even metals). For example, on the Space Shuttle the orbiter’s three main engines used liquid hydrogen as the fuel and liquid oxygen as the oxidizer. However, the Space Shuttle’s two solid rocket boosters used aluminum powder as the fuel and ammonium perchlorate as the oxidizer.

During combustion, new compounds are made and these are called the exhaust. At the same time, a great amount of heat is produced because combustion is an exothermic reaction (it makes energy, in the form of heat and/or light). Altogether, the combustion in the spacecraft’s rockets produces great amounts of exhaust gas at high temperatures and pressure. The pressurized hot gases are pushed out from the bottom of the rocket and thus, the spacecraft is thrust upward. This is an example of Isaac Newton’s third law of motion, which states that for every action, there is an equal and opposite reaction.

Mixing the fuel and oxidizer together correctly is complicated and something that real rocket scientists work hard to perfect. In this chemistry science fair project, you will become a rocket scientist, but instead of using rocket fuel and oxidizers, you will use baking soda (sodium bicarbonate, or NaHCO3) and vinegar (acetic acid, or CH3COOH) to make a different kind of chemical reaction that can launch a small-scale rocket. This reaction is shown in Equation 1 below. Based on acid/base chemistry, the reaction produces water (H2O) and carbon dioxide (CO2). (You do not need to know acid/base chemistry to do this science project, but if you want to learn more about it, you can check out the Science Buddies resource Acids, Bases, & the pH Scale.) Carbon dioxide is what makes soda fizzy and bubbly, which is why you see lots of bubbling and foaming when you mix baking soda and vinegar together. You will mix baking soda and vinegar in a capped film canister and take advantage of the pressure the carbon dioxide gas creates in the canister to launch your own small-scale rocket. When the pressure (or force being exerted against the inside of the canister by the carbon dioxide gas) is great enough, the canister’s lid will pop open and the rocket will launch. How will different amounts of baking soda and vinegar affect the launch height? While trying to answer this question you might not be launching the Space Shuttle, but you will still have messy fun escaping the force of gravity for a few seconds with your own rocket!

Note: Since this science fair project can be messy, you should perform all tests outside. Your location should be along a tall wall and free from debris.

Table 1. In your lab notebook, create a data table like this one to record your data. 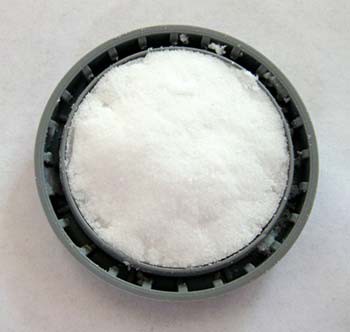 Figure 2. Tightly pack the damp baking soda in the depression in the lid. Try not to let the baking side go outside of the depression or it make be difficult to snap the lid on the canister. 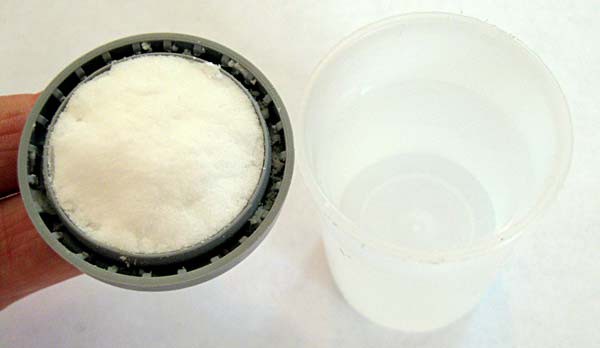 Figure 3. Fill the film canister with as much vinegar as you can (1 tsp. at a time) without it coming into contact with the baking soda when the lid is put on the canister. (Tip: This may be around 5 tsp. of vinegar.)