How can seawater from the oceans be turned into fresh water that is suitable for people to drink? Through a process called solar desalination! In this science project, you will make a solar desalination apparatus using readily available materials, and a power source that is free.

Build and test a solar-powered device for desalinating water and investigate how the color of the bottom of the device affects its efficiency.

Solar-powered devices  have been invented to reduce our dependence on other energy sources.

With all of that salt, seawater is not suitable for drinking nor for watering most plants. The fluid circulating in your body (blood plasma) contains much less salt than seawater (on the order of 9 grams of total dissolved solids). If you were to drink seawater, your body would actually lose water, because the high salt concentration of the seawater causes an osmotic pressure gradient which drives water out of your cells. Desalination is the process of removing the dissolved salts from water, making it pure enough for drinking or irrigation. 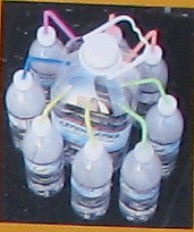 The idea was to add saltwater to the eight small bottles. The condensation was supposed to drip down from the straws into the large collection jug. Unfortunately, this design did not work.

The inventor did not let an initial setback discourage him. He analyzed what was wrong with the design and set out to improve it. His second design, shown in Figure 2 below, still follows the same principles of using readily available materials and easy construction methods, but also includes some important improvements. One important change is that this time the design uses a container with a larger surface area to hold the seawater. 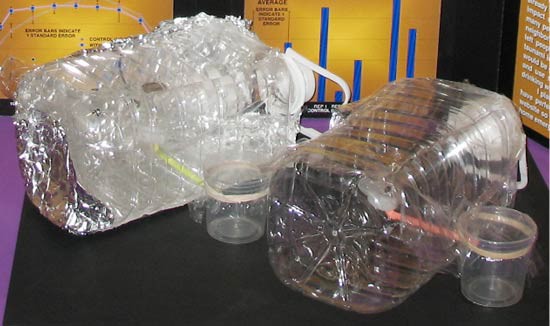 Figure 2. Here are two examples of the  second design for a solar-powered desalination device. The large jug, laying on its side, holds the seawater. The top side of the jug has been cut out with a utility knife. Plastic cling wrap seals the top side, and a quarter is used as a weight to make a low point in the center. Beneath that low point, the inventor placed a collector, made from the top of a small water bottle with a flexible straw inserted into a hole in the cap. The other end of the straw passes through the side of the large jug, and then to a plastic cup where the condensate collects. The device on the left has an aluminum foil reflector covering the back side and bottom of the large jug while the device on the right has no reflector.

Why is it important that in the improved design a large jug is used to hold the saltwater? The jug, which is laid on one side, lets the saltwater cover a relatively large area. Because water molecules can only evaporate from the surface of water, a body of water with a large surface area will have a greater rate of evaporation than a body of water with a smaller surface area (assuming all other conditions are the same). The top side of the jug is cut out, using a utility knife, and covered tightly with plastic cling wrap. The cling wrap covering the large opening provides a large surface area on which condensation can form, which is another reason why using a larger container is an important change in this design. A quarter is used as a weight to make a low point at the center of the cling wrap. When the device is heated up in the sunlight, the condensation that forms on the cling wrap eventually flows down to this low point and drips into a “funnel.” In this  design, the funnel is simply the cut-off top of a small water bottle, which has a flexible straw inserted into a hole cut in the cap. The other end of the straw passes through a small hole in the large jug, and then to a plastic cup (tightly covered with cling wrap using a rubber band to prevent evaporation).

The inventor tested the desalination devices based on his second, improved design with and without aluminum foil reflectors (you can see examples of each type in Figure 2 above). For each device, he made several measurements so that he could compare the performance, including the amount of condensate collected, or his condensate yield, and the conductivity of the saltwater and condensate. The yield measurements told him how efficient his devices were at heating the saltwater and producing desalinated water. The conductivity measurements (which can be taken using a handheld meter) told him how well the condensed water had been purified of dissolved salt because water that contains dissolved salt can conduct electricity, and the more salt that is dissolved in the water, the higher the conductivity of the water.

In this environmental engineering science project, you will build desalination devices similar to the  second design and see how the design can be improved even more. Specifically, you will investigate how the color of the bottom of the device affects its efficiency. You will compare a device with a white-colored bottom to a device with a black-colored bottom. Something that is light-colored reflects more light than something that is dark-colored, which absorbs a lot of the light that hits it. Light is a form of energy and energy can be transferred to nearby objects (such as a body of water) in the form of heat, in a process known as heat transfer. Which colored bottom do you think will result in a more efficient desalination device?

You will also need to gather these items:

In this part of the science project, you will make two desalination devices. 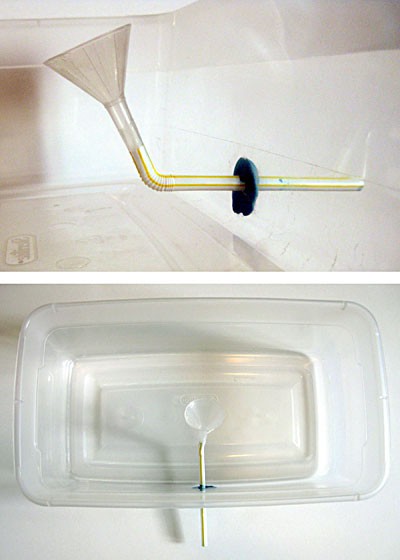 Figure 3. After putting the straw-funnel assembly in the hole in the container and securing it using some modeling clay, your setup should look similar to the one shown here. The top picture shows a close-up from the side and the bottom picture shows an overall view from above. 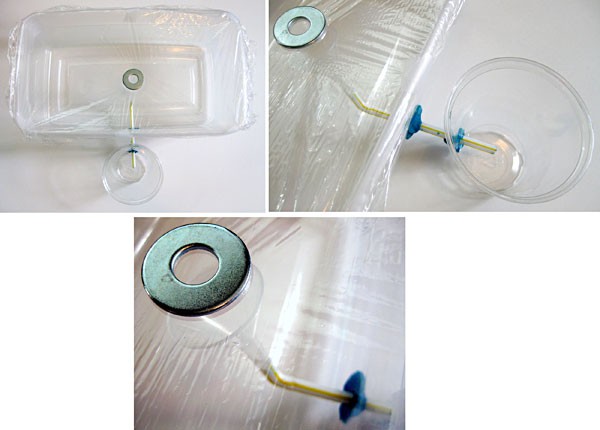 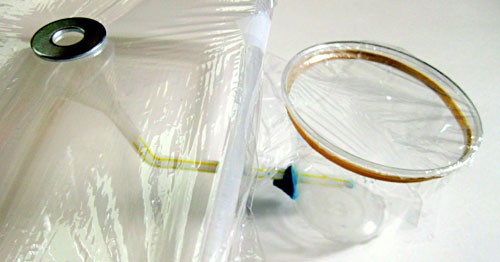 Figure 5. Secure a piece of cling wrap on to the top of each collection cup using a rubber band, as shown here. 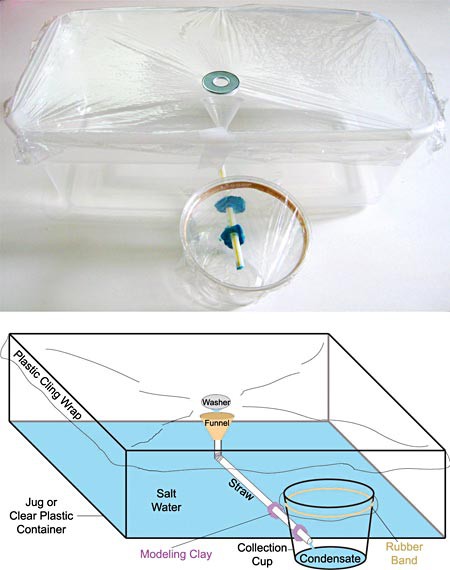 Figure 6. When your desalination devices are ready for testing, they should look similar to the one in the top picture (except yours should have black or white construction paper on the bottom). The diagram on the bottom shows what the desalination devices should look like during testing as condensation is collected. (The construction paper is not shown in the diagram.)

In this part of the science project, you will test the performance of the desalination devices. 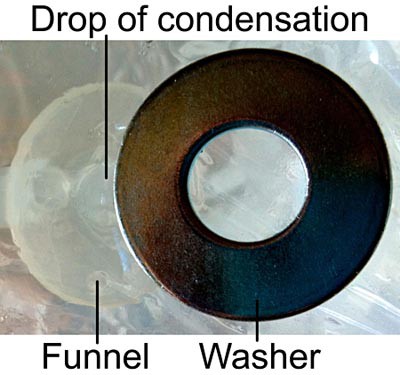 Figure 7. As shown in this close-up picture, you can arrange the washer so that its edge is the lowest point on the cling wrap and is positioned over the funnel, allowing condensation to drop into it.

If you are having trouble with this project, please read the FAQ below. You may find the answer to your question.
Q: I think I am having low yields. What yields should I expect and what are some things I can do to improve my yields?

A: If you are using the Science Buddies kit for this project idea, the setup should yield at least 8 milliliters (mL), but depending on the weather conditions and other factors it may yield significantly more. There are a number of factors that can affect the yield in this science project. Here are some things to check:

Q: I live in a cold or cloudy climate and cannot get this experiment to work outside. Is there still a way for me to do this project?
A: Yes. Try doing the project indoors with a heat lamp or high-wattage incandescent light bulb (not CFL or LED) instead of sunlight.
Q: Why is it important that I make the hole in the jug or container near the bottom of the container?
A: If the hole it too high, the funnel may touch the plastic cling wrap, which can prevent some condensation from dripping into the funnel and result in lower yields. The hole should ideally be placed as low as possible, just above the water level in the jug or container. The hole in the collection cup should be lower so that the straw slopes down towards the collection cup.
Q: The funnel keeps tilting so that it does not completely face up. What should I do to fix this?

A: If the funnel is tilted a little it should still work fine, as long as you can see that the condensation drips directly into the funnel.

Q: My results are not what I expected them to be. Why might this be?
A: If different amounts of salt water were added to each jug or container at the beginning of the experiment, or the salt water added was a different temperature in each one, this could affect how well the water evaporated in each one. All factors should be the same for each jug or container, except the color of the construction paper. You may also want to make sure that the condensation is dripping directly into the funnel for each setup, and make adjustments to the setup if it is not.
Q: My washer or quarter is bigger than the funnel. Is this a problem?
A: No, you should be able to move the washer or quarter so that the condensation collects right beneath one edge of the washer or quarter. Position this edge over the funnel and watch to make sure that the condensation drips directly into the funnel, as shown in Figure 7 in the project idea. Make further adjustments to the setup if needed.